The Trump administration is currently building a border fence in Whatcom County, Washington where I lived for most of the last decade.

In order to put this in perspective, first let’s look at a few indicators. I am using a few of my favorites, the Democracy Index from the Economist Intelligence Unit, Press Freedom Index by Reporters Without Borders, and the Corruption Perceptions Index by Transparency International. 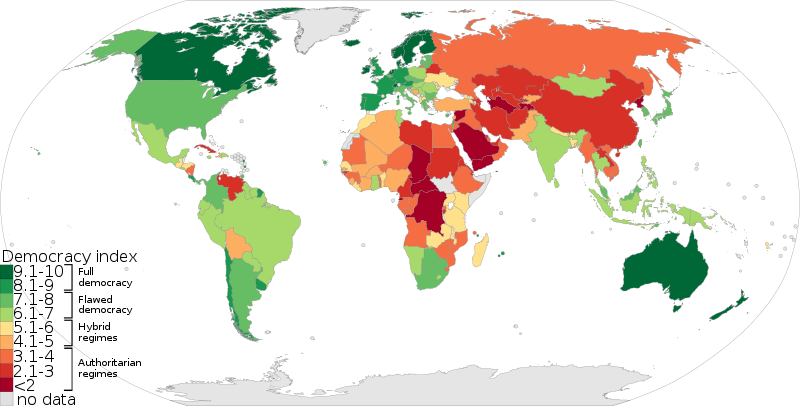 This makes it pretty clear that there are several areas which do very well in terms of average freedom, and these also tend to correlate with each other.

Here is a current map of countries in the world which have open border treaties:

If we were to filter out only the freest countries in the world, so those that are in the top thirtieth percentile for press freedom and corruption which have a closed border we find only one  border which isn’t open, and that is the border between the United States and Canada. Out of 23 such borders in the world which qualify.

I created a viability index, which multiplies corruption, ease of doing business, press freedom, and homicide rates together in order to get a rough metric to understand the country pairs which are the most likely to have an open border. The United States/Canada border scored as the 4th most likely in the world out of closed borders to adopt an open border.  Our score was hurt most by the homicide rate in the United States. The three pairs ahead of us are Croatia and Slovenia, Ghana and Burkina Faso, and Bulgaria and Greece. Two of these pairs are  going to be open through the Schengen Area in the near future. Ghana and Burkina Faso have significantly worse corruption than the other pairs in the list.

Using a Support Vector Machine using cross validation, I can predict whether a border is open or closed with 77.5% accuracy.

One question with extremely important consequences for everyone in both the United States and Canada is which direction this goes. It is pretty obvious that most of the countries which have opened their borders with their neighbors were already very developed before they opened them, which means the correlation almost always points from higher political development in neighboring countries leads to open borders.

In order to test this, we can look at the cases of open border areas in the order of age:

Of these oldest open border schemes, we have most which preserved pre-existing open borders between these countries which shared a colonial and cultural past, and the Schengen Area which is in the region of the world with the most highly developed countries which border each other as a cluster. There are no other open land borders in the world.

So, what is really important to understand about this, is that on a global scale, the United States/Canada border is an outlier. The following graphs should make this very clear (blue means open border, red means controlled border):

What is so striking about these graphs is I don’t need to point out which pair is the United States and Canada.

In the graphs which look at the relationship between press freedom, corruption, and democratization between neighboring countries, there is always one red dot which stands out. That is the United States and Canada. By any metric, the United States and Canada are unique in the world in how we do not have an open border given the political economic realities of our countries.

This heavily implies that building a fence between our fences makes absolutely no sense since there is no other border in the world like ours which is not a free flowing border.