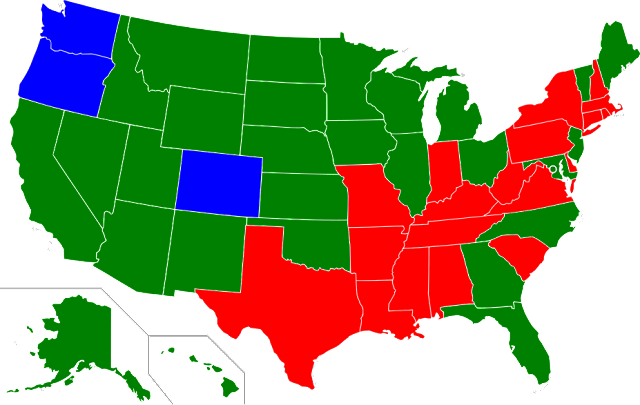 Across the United States, millions of Americans are going to stand in long lines this year to vote for President, Senators, their Representative, and state and local officials across the country. This has been a tactic used by the Republican party in particular over the last few years to reduce the number of people who are able to vote in areas which primarily vote for Democrats, particularly African Americans. This significantly impacted the 2016 election, and helped Trump win slim majorities (by the official count) in Michigan, Wisconsin, and Pennsylvania, which gave him the Presidency.

It doesn’t have to be this way.

Most states in the United States allow voters to vote absentee for no reason, simply by filling out a form with their county auditor. The ballot is then sent to them in the mail, and then their vote is counted. This can increases voter turnout by 3% once other factors are taken into account. In states like Wisconsin, Michigan, Ohio, and Florida, this can make a significant difference in the overall election.

Every American who lives in a green state should register to vote absentee as soon as possible.

The easy way to solve this problem is if the Democratic Party does a deliberate information campaign to teach voters about their rights about absentee voting in every state as soon as possible. Every county Democratic Party, and every candidate for every office should have absentee voting registration forms at every event in every green state. Getting voters registered to vote absentee whenever possible will significantly reduce one significant voter disenfranchisement tactic the Republican Party has been using over the last decade to ensure that the voice of the American people is heard.

I am 27 years old, born during the twilight of George H.W. Bush’s presidency. In my entire life the Republican Party has only won the popular for the Presidency once. People need to have their voices heard and the easiest way to do that is to have as many people vote absentee as possible. Millions of Americans, myself included, rely on this to guarantee that our health care continues. Until the Republican Party removes the abolition of the Affordable Care Act from their platform this is going to be the biggest issue for me. The other big issue are the Geneva Protocol violations that the Republican Party has been doing with their control of ICE over the last few years. We need to improve these problems as much as possible, as soon as possible.

As long as one party campaigns to significantly harm the lives of Americans, I will be partisan.

Every state legislator, governor, member of congress, and local official in this country should do everything in their power this year to get as many people voting absentee as possible. Simply expanding people’s rights and letting people know about the rights which they already have will make a tremendous difference this year, which will help us flip critical Senate seats, and ensure that Donald Trump is a one term president. the sooner he is out of office, the sooner the State of New York will prosecute him for his financial crimes, and the sooner the people of New York can get the tax money they are owed. It will allow us to end the civil liberty violations on the border, and expand freedoms in so many other ways in the 2020s.

But only if people are able to vote.