We are currently in declaration season for the upcoming elections in 2020. Elections are going to decide state legislatures, several governoships, the entire House, and 1/3 of the Senate. It is impossible to exaggerate the importance of this election. Here are my thoughts:

We have the best slate of candidates for President we could possibly have. In terms of experience, we have a former vice president (who honestly shouldn’t be nominated for his foot in mouth syndrome, the only thing going for him is people recognize his name), 8 senators, 3 governors, and several representatives.

When it comes to the Senate elections, we need to pick up at least 3 seats in order to have a fighting chance. The 4 states with Republican Senators up for election which the least favorable Cook Partisan Voting Index scores for them are Iowa, North Carolina, Arizona, and Georgia.

I prefer candidate who are currently in office, which means they have the opportunity to propose legislation right now addressing the issues of today, and then with that information someone who is able to pass legislation regardless of the political climate will be my preferred pick, such as Senator Barack Obama in 2008 which helped propel him to rival Senator Hillary Clinton in the primary almost out of nowhere. Someone with a powerful speaking voice who can speak eloquently and clearly will be preferred to someone who has a weak stage presence. Someone who has not lost before is preferred to someone who has lost elections in the past.

In Iowa Joni Ernst is up for election. She is the 10th most Conservative Senator in one of the most moderate of States, so with the right candidate we have a really good chance.
Any one of these three candidates would do a good job. I think Finkenauer could win if she runs.

The incumbent only won by 48.8% of the vote in 2014, so I believe this is one of our best shots at winning in 2020. He opposes net neutrality, and is dismissive of the Mueller investigation. He needs to go.

Arizona is weird because it is a special election with an incumbent Republican who has already lost against the other Senator in Arizona. The opponent who is declared is Gabby Giffords widow, astronaut Mark Kelly, who has a really good chance. Katie Hobbs might run, and she has already won a statewide election as Secretary of State. I think this will be a close election but if the Democrats reach out properly and hold McSally responsible for her support of the detention camps at Guantanamo Bay and voting against accessing Trump’s tax returns, we could have a good shot of taking Arizona.

Scott Holcomb  has been mentioned as a potential candidate in Georgia. As a sitting State Senator since 2011 he has worked on legislation which passes which helps victims of sexual assault in a Republican legislature. If he runs, he could win.

Sara Gideon, the Speaker of the House, is running and she can win.

Former Governor John Hickenlooper is running, and will hopefully win.

If we win just half of these seats than we will have a Federal trifecta in 2021.

The Democrats are playing the defensive game for the House next year of course. We can lose as many as 17 seats and still have a majority. Current projections put the Democrats with a slight majority in 2021, which should be enough to pass legislation.

There are two possible pickups in Vermont and New Hampshire in 2020. In Vermont the Lieutenant Governor is a reasonable pick, and if he wins the Democrats will have a trifecta.

In New Hampshire, the mayor of Manchester and majority leader of the Senate are both viable candidates who could win. This will deliver a Democratic Trifecta.

Republicans have a 2 seat majority in the House, the closest margin by percent in the country. All 60 Representative are up for election every two years. The three closest districts were in 20, 6, and 23. 20 is just northeast of Glendale and Peoria, 6 goes from Flagstaff to Phoenix, and 23 is in Northeast Greater Phoenix. 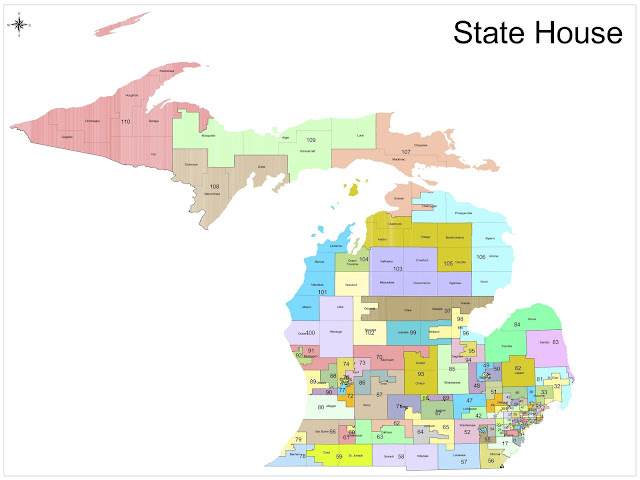 Michigan has a 6 seat Republican majority out of 110 seats in the House. Districts 104,38,110, and 61 are the closest margins which will give Democrats control of the House following next year’s legislative election. 104 is at Grand Traverse, 38 is in the Detroit suburbs, 110 is the northwestern most district, and 61 is South Kalamazoo. Democrats need 4 pickups to have a majority.

Virginia is technically having elections this November, but it is part of the same two year cycle, so I’ll discuss it here.
Virginia has a 2 seat majority in each house for the Republican Party and a Democratic Governor.
There are 6 competitive seats in the Senate where Northram won in 2017, and have Republican legislators. There are 12 such districts in the House as well. Each of these need to be targeted and have as good candidates as the local parties can find who are involved in local organizations. The Democratic Party could easily pick up a Trifecta in Virginia in 4 months.

Every other state in the Union which has a Republican majority has over a 10% lead, so unless if this cycle has a particularly large landslide year, I do not expect any big changes.

This leaves us with not very many places for progress which will fully flip a chamber, but some important places to make a difference building towards the future.

I expect most states will be the same.

Democrats could pick up trifectas in Virginia, Minnesota, Vermont, and New Hampshire.

Republicans could potentially lose their trifecta in Arizona.

Republicans will likely gain a trifecta in Louisiana.

The total trifecta party score post 2020 will likely be:

This is a really important step in the right direction.