The Schengen Treaty is without a doubt one of the most important treaties in the world. It comprises 26 states, most of which are members of the European Union, have a GDP of $15 trillion and a population of 419 million people. People are free to move within this area, they can live and work in any other member state, as there are no customs whatsoever between any of these countries. Most members are EU members, with a few exceptions, Iceland, Liechstenstein, Monaco, Norway, San Marino, Switzerland, and Vatican City. 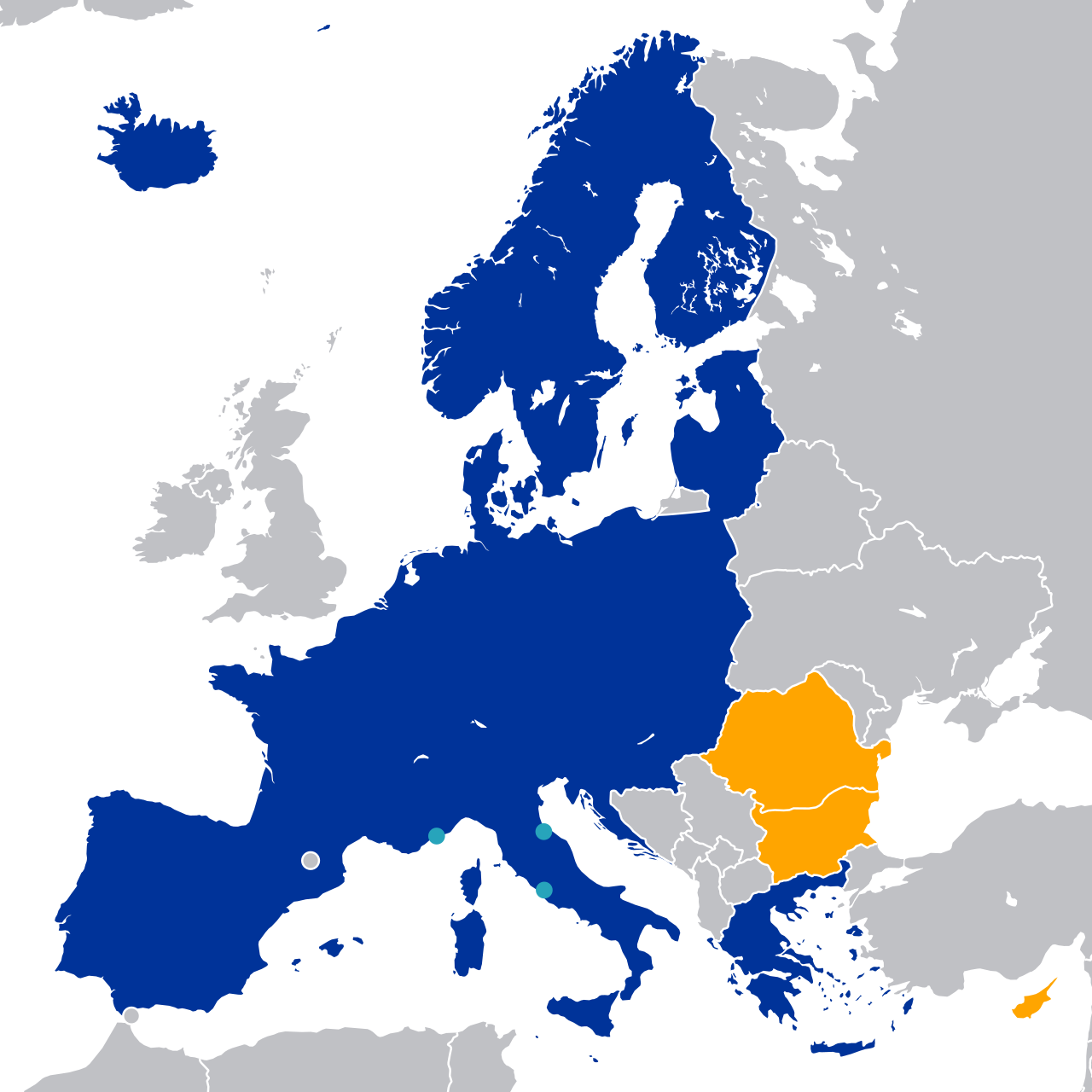 This is the pure liberal dream. The idea is that without trade barriers between these countries that people will have less of a desire to go to war with others. And it has worked along with the free trade area which has grown out of the European Coal and Steel Community which was founded in the 1950s. Bulgaria, Croatia, Cyprus, and Romania are currently pending the next council meeting.

The question now is, should Schengen be expanded, and if it is, how? As the title of this article suggests, I am in favor of expansion. The Schengen Treaty, as a legal document presents very clear rules on what is to move in between borders. The bulk of the laws are included in section 1, under the 14 June 1985 convention. The rules are laid out in the following titles as follows in this convention:

All of the laws and regulations are already in existence already, and the rules for Schengen are really straight forward and reasonable. Basically, control the borders, Mutual recognition of each other’s visas, police need to cooperate and respect the laws and decisions of other countries in the area, sharing of information between countries when it comes to visa relevant information, a common tariff policy, don’t leak data, and each member has a seat in the executive committee. That’s the entire agreement in a nutshell.

There is also, notably, no requirement of a country to be in the European Union or even Europe to join the Schengen Area in the original document. This means, theoretically, that the Schengen Area could be expanded to outside Europe if I am not missing another law which regards Schengen membership. This seems to be the case because Switzerland joined in 2008, and it is not a member of the EU, and Liechtenstein joined in 2011 after the Treaty of Lisbon, the last major amendment to European law. This means that non-member states can indeed join the Schengen area.

The question then becomes… who should be included? Prospective countries to join the Schengen treaty could be established by fitting the following criteria in my mind:

These are 5 things which can easily be implemented.

The Schengen member with the highest (worst) Corruptions Perception Index currently is Greece, at 44. they ranked #69 in the world as of 2017, which leaves 43 potential members by that metric.

The Schengen member with the highest press freedom score currently is still Greece, though Bulgaria will likely acede soon and it has the worst score, but they will likely not be chosen due to the factors which cause them to fare so poorly on the press freedom index, so that leaves Greece as the lowest score. They rank #70 in the world as of 2018 (yes, these are significantly correlated indexes) and that again leaves 44 potential members by this metric.

The obvious choices for membership by these two metrics combined are: 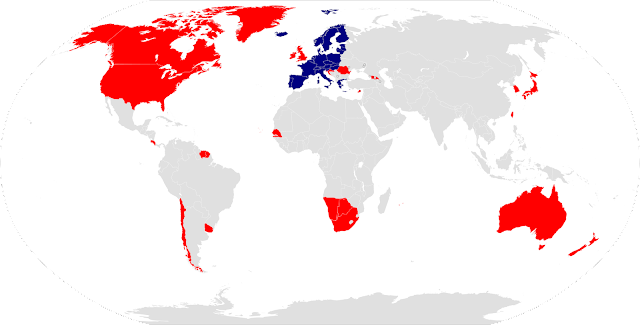 This map is interesting for many reasons. Following this logic there are countries which are qualified to join the Schengen Area using my first two criteria on every continent. Some countries which have expressed interest are missing from the map, Israel is blank because their press isn’t free enough, Bulgaria is blank despite being considered to join the Schengen area because they are too corrupt,  Ukraine is both too corrupt and their press is not free enough.

The one other variable which could be useful in determining whether a country would be able to join the Schengen Area would be the Ease of Doing Business Indicator. The reason for this one is the acquis on the free movement of capital, and if a country doesn’t allow ease of movement of capital within its own borders it will not be able to join Schengen. This significantly reduces the number of countries which are eligible to join down to 17 prime candidates. The economies of Botswana, Cape Verde, Namibia, Senegal, Suriname, and Uruguay are less free than that of Malta, the Schengen member with the least free economy, which means that the best candidates for joining the Schengen map looks like this: 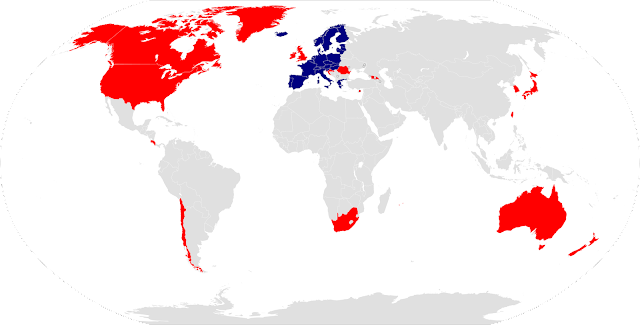 Every country shaded in red on this list has a Corruptions Perceptions Index, Press Freedom Index, and Ease of Doing Business Index ranking better than the worst performer currently in the Schengen region.

The top performer not currently in Schengen currently is New Zealand when you multiply the CPI, DBI and divide by the PFI. The order of this ranking follows as Canada, Australia, Ireland, United Kingdom, Costa Rica, United States, Taiwan, Chile, Cyprus, Japan, South Korea, Georgia, Mauritius, Romania, South Africa, and then Croatia. If the current member states of the Schengen Area and these 17 countries chose to unify their customs into the Schengen area this would be mutually beneficial.

The countries which would most benefit from joining would honestly be the United States and Canada. With the world’s longest border, highly developed economies and being among the most free in the world, we could benefit in joining.

Another factor when it comes to opening up your borders to another country is safety. This is easily measured using homicide rate as a rough approximation of the relative safety of one country or another. Three countries unfortunately have homicide rates which the European Union will likely find unacceptable, and those are Costa Rica, South Africa, and my home, the USA. The country with the highest murder rate in the Schengen area is Lithuania with a homicide rate of 5.25 people per 100,000. The United States unfortunately has a homicide rate of 5.35 meaning if the Schengen Area would not allow new members due to an intentional homicide rate we are just above the threshold.

This problem deserves special attention because we are so close to having a low enough murder rate to qualify for Schengen Membership, if this was a qualifier. Looking at murder rates by states and territories, the ones which have a higher murder rate than Lithuania are in descending murder rate (by latest available data): Louisiana, Missouri, Nevada, Maryland, Arkansas, Alaska, Alabama, Mississippi, Illinois, South Carolina, Tennessee, New Mexico, Georgia, Oklahoma, Ohio, Indiana, Arizona, Kentucky, North Carolina, Pennsylvania, and Michigan. Reference

This deserves an article of its own, and we need to focus on reducing our murder rate as a country.

This still leaves 14 countries around the world which have the proper statistics to join the Schengen travel area, from every continent. These 14 have low corruption, and are safe. Schengen is estimated to boost the trade and economics of the member states, and there is overwhelming economic evidence that increasing trade reduces the likelihood of war. For these reasons I believe it would be wise for the Schengen Treaty to be expanded outside of Europe, the UK and Ireland should join Schengen (which I know is unlikely due to the whole Brexit debacle) because it is the logical next step to fostering peace in the world we live in.